My help cometh from the Lord, which made heaven and earth.
Today’s message is a powerful reminder of where our help comes from; the Lord God Almighty. This reminder was sent to me by my nephew, and I thanked him for the reminder and that I would share with everyone.
We must remember that the Lord God is our helper. There is no battle that He cannot win because He is a mighty warrior and will fight all our battles. I constantly use this phrase; I stand tall from my knees. Believers, as we continue our fight against evil and wickedness in high places, praying as we give feet to our prayers, we have our mighty warrior on our side. We can begin our victory lap as we sing our victory song of joy. I say this because as God’s children we can go to Him in the time of need with the assurance that He will provide the help that we need. When we need deliverance; He delivers; He comforts when it is needed; He hears and answers prayer.
This country and world are in a very dark place with sin running rampant; evil appears as though there is no stopping it; I will tell you that Satan and his evil minions’ days are numbered. Take heart because God is all-powerful and will bring all evilness to an end. God is the righteous judge who will punish the evilness that is taking place in this country and our world, and He will reward righteousness. As I have previously stated right will always be right and the truth will prevail.
All of our help comes from the Lord.
Author’s contacts:
White3285@sbcglobal.net
http://theshepherdministries.org
www.goodshepherdwritingandpublishing.com
https://willie-writing.blogspot.com
https://www.youtube.com/user/WillieWhite

Posted by The Author at 8:44 AM No comments:

..Then every one of us shall give account of himself to God. But let judgment run down as waters, and righteousness as a mighty stream. But let judgment run down as waters, and righteousness as a mighty stream.
In today’s society, there are many who commit wrongs but refuse to take accountability for his/her actions. Our scripture texts make it plan that everyone will be held accountable for his/her actions to God, and His justice will rain down like water and His righteousness as a mighty stream. What does this mean? It means that the wrongdoer can either take responsibility here on earth and if not, there will come a day when the person will have to stand before the righteous judge God Almighty.
Standing before the Almighty God, there will be no excuse of saying I didn’t know, because everyone has the Holy Bible that says what is right and what is wrong, and they all have been taught right from wrong. The person chooses to either do right or wrong.
It is noteworthy to say, the wrongdoer can refuse to admit his/her wrongdoings and can even justify the wrong and can even expect the righteous to understand the wrong that has been done. The wrongdoer will even expect the righteous to go along with the wrong. Let me say this, wrong is wrong and will never be converted to right. We who are righteous must stand firm on the wrong and call it for what it is.
Allow me to close with my mother’s saying, “every tub has to sit on its own bottom.” This means that everyone will have to give an account for his/her actions.
Take responsibility for your actions; if they are wrong, then confess, ask for forgiveness and then move on. If your actions are righteous, then thanks for His Holy Spirit and your commitment to doing what is right.

When Jesus had thus said, he was troubled in spirit, and testified, and said, Verily, verily, I say unto you, that one of you shall betray me. When
Then Judas, which had betrayed him, when he saw that he was condemned, repented himself, and brought again the thirty pieces of silver to the chief priests and elders, Saying, I have sinned in that I have betrayed the innocent blood. And they said, what is that to us? see thou to that.

If we were to define betrayal it would be the act of being disloyal; the act betraying someone or something or the fact of being betrayed: violation of a person's trust or confidence, of a moral standard, etc. (Merriam-Webster Dictionary online).
Based on our scripture texts and the definition, the act of being betrayed is on display daily in our society. This brings me to these questions; have you ever been betrayed?  Have you knowingly betrayed, someone? Is our country being betrayed? To betray someone is to violate that person’s trust or confidence and it shows the betrayer’s moral character.
I have been betrayed and it hurts because my confidence in that person has been destroyed as well as a relationship. Will I ever trust the person again? Probably not, because when the trust factor has been destroyed then there is nothing left. Have I ever betrayed, someone? Hopefully not. I say hopefully not, because unintentionally this could have happened, but if I have then I ask for forgiveness. Sometimes we sin unintentionally, then we must and should seek forgiveness. Judas sought forgiveness for betraying Jesus, but his partners in crime refused to take back the money.
Judas cause innocent blood to be spilled for thirty pieces of silver; what was the value of Judas’ and Jesus' relationship? What is the value of a relationship between two people or our country? Judas was fulfilling prophecy and didn’t know that he was. Isn’t the value of a relationship worth more than thirty pieces of silver? Isn’t our country worth more than thirty pieces of silver?
Let me close by saying, betraying someone or something is a sin as noted in or lesson texts; repentance is necessary on the part of the betrayer, but the pain and damage linger for a while. Maintaining a good relationship is greater than thirty pieces of silver. I say this because love and trust are greater and more valuable than the thirty pieces of silver, and it takes less effort than the process of trying to restore a broken relationship.
Comments are welcomed.
Author’s contacts:
White3285@sbcglobal.net
https://willie-writing.blogspot.com
http://theshepherdministries.org
www.goodshepherdwritingandpublishing.com

Posted by The Author at 7:21 AM No comments:

Pride goeth before destruction, and a haughty spirit before an (an) fall. Better it is to be of an (an) humble spirit with the lowly than to divide the spoil with the proud.
As I was pondering what to write this morning, what came to mind is the current situation that is 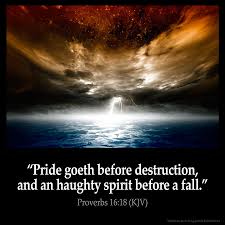 occurring in our country today. Our political climate is causing many to have anxiety attacks and concerns. We are to cast all of our concerns on the Lord and say but God, and as we are leaving the situation with God knows that pride goes before a fall. We must remember that yes, God is in control and in His time will bring about a change. Our job is to trust Him and never doubt Him.

God is the same as He was during the Bible days and will be for all generations. All who thinks of him or herself as being more than what or who they really are; God will reveal who the person (s) really are. The prideful who thinks of him or herself as being all-powerful; let me remind you only God is all-powerful. He knew these days were coming from the beginning of time and He has the perfect solution that will come forth in His appointed time. We who believe and trust God; fear not (Isaiah 41:10) because Jesus has overcome the world and its sins and wrongdoings (John 16:33).
Let me close with these words; pride is a spiritual cancer that causes a division in families, governments, and churches. Put God first in everything that we do and or say; have a humble spirit acknowledging that in Christ all things are possible; out of Christ, all accomplishments are temporal.
Comments are welcomed.
Author’s contacts:
White3285@sbcglobal.net
https://willie-writing.blogspot.com
http:theshepherdministries.org
www.goodshepherdwritingandpublishing.com
https://www.youtube.com/channel/UCUya5OrWPvzru4dpaTF80KQ

Posted by The Author at 8:03 AM No comments: