The Lord is my shepherd, shall not want.

Today's message is designed for us to look back on 2016 and consider the blessing and trials that we encountered this year; our blessings out weigh our troubles and for this we say thank You Lord.
Reflecting on the entire 23rd Psalm, we see just who the Lord. He is ever present and His goodness and mercy is there regardless of the situation. There is no problem that He can't solve and no mountain to high for Him to climb. He is every where.
That being said, we can look forward to the New Year with a renewed hope that the God we serve is much larger than any problem and or situation we may encounter. My advice, tell your little problems about your big God. I say this because whatever we may face God knew about it before it began and have the solution we have to see the situation through to the end. In doing so our faith grows and our confidence in the Lord increases. There is no failure in Him.
That said, as we reflect, look forward to the New Year with a strong conviction and a renewed commitment to live for Jesus and let the world know who we are and to whom we belong.
Your comments are welcomed
Author's contacts:
white3285@sbcglobal.net
http://willie-writing.blogspot.com
www.goodshepherdwritingandplubshing.com

Posted by The Author at 7:00 AM No comments:

Joy To The World

When they saw the star, they rejoiced with exceeding great joy.

When God does something He does it with grandeur to the point there is no mistaking His message. I make this claim because the writer Matthew presents Jesus' birth (2:1-10) with the wise men asking, "Where is he that is born King of the Jews? For we have seen his star in the east and are come to worship him." The wise men were the religious learned men of the region and King Herod himself were troubled of the news and sent the wise men to search for the new born King. As God would have it these men returned to their respective homes a different way to keep from giving King Herod his answer as to where Jesus was. The king had ill intentions for wanting to know the whereabouts of baby Jesus, but the wise men intentions were different. God always has a master plan which will be carried out.
God's grandeur in this scenario is that He used a star to guide the wise men to baby Jesus so they too could worship Him with great joy as they brought gifts of honor for the new born king. We have seen three sets of worshippers worshiping Jesus, the shepherds who were abiding in the field, the heavenly hosts and now the wise men who represented the Christians of their day. With that being said, let's join in the celebration of worshiping Jesus' birth, then we too can sing Joy to the World Christ the King is born.
Jesus' birth is a joy like none other. 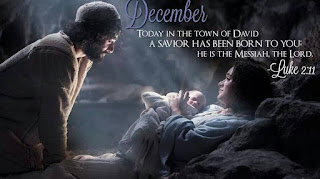 For unto us a child is born, unto us a Son is given: and the government shall be upon his shoulders: and his name shall be called Wonderful, Counseller, The mighty God, The everlasting Father, The Prince of Peace.

The prophet Isaiah was foretelling of a time in the future encouraging the people of his day not to get discouraged because the promised Savior was coming just as promised by God. This scripture coincide with Isaiah 7:14 as the prophet provides details of Jesus' birth and the unique way in which He would be born.
Isaiah's descriptive name of Christ characterizes the functions of the Messiah. The name "Wonderful" symbolizes the miraculous works or supernatural wonders He would perform, such as miracles He would perform. The name "Counseller" represents the incarnation of perfect wisdom as He provided the perfect plan of salvation. The name "Mighty God" embodies the full deity of God as He was God in the flesh. The name 'The Everlasting Father" means that Christ would reveal His heavenly Father and He Himself would have compassion on all mankind as a compassionate father that loves all His children. Lastly, the name "Prince of Peace" means that Christ would bring the peace of God to all humanity through mankind's deliverance from sin. Christ is the man of peace.
A Savior was promised, a promise kept God--Jesus Christ is the promised Messiah. Accept Him!

Posted by The Author at 6:04 AM No comments:

Jesus The Light Of The World

Continuing our discussion on the birth of Jesus Christ; today's focus on Him being the light of the world who was rejected by the world.

Jesus is the light of the world because He came to save lost souls from eternal damnation, but to all who hears and accepts His gospel message He lights their way into eternal salvation. One of Jesus' famous saying was that "the well doesn't need a doctor" only the sick. This means the spiritually sick who are still bound by sin and are separated from their creator and Savior.

Jesus is the way, the truth and the light and no man cometh to the Father except they go by Jesus (John 14:6). Jesus being the doorway to God the Father, begs the question, why would anyone reject Jesus given all He done in the Father's redemptive plan of salvation?

All who rejects Jesus remains marred in sin which blinds the person to his/her condition as sin makes a person feel good, which lack spiritual benefits to the person.

Jesus is the light of the world because He made the world and we must accept Him for who He is and His saving power.

The name of Jesus is like no other name on earth and in heaven.

Posted by The Author at 7:15 AM No comments:

..The Lord Himself shall give you a sign; Behold, a Virgin shall conceive, and bear a Son, and shall call His name Immanuel.

The prophet Isaiah foretold of Jesus' coming with explicit details that the people of his day could look for the coming Messiah with assurance. Isaiah left nothing untold as it relates to the birth of the Messiah. This includes His name-Immanuel, which means God with us (Matthew 1:23). The prophet Isaiah could speak with such authority because he spoke exactly what God said.
God promised that a Savior would come and save His people through His atoning death. If the question was raise, why did the people need a Savior? This is because God the Father had pronounced the whole world guilty of sin; even though priests would make yearly sin atonement, they were required to atone for their sins before making atonement for the people. Whereas, Jesus would make a one-time sin-atonement and all who accept His sacrificial work on the cross would be saved.
It is noteworthy to say that God the Father's love was so great that He could not allow His prize creation to remain separated from Him; therefore, He promised a Saviour who would redeem man from sin.
It is also worth noting that in God's own time He fulfilled His promise of sending the Messiah. God being true to His word we say with confidence that there is no failure in my God.
The prophesied Christ; my Lord and my Savior.
We welcome your comments.
Author's contacts:
white3285@sbcglobal.net
http://willie-writing.blogspot.come
www.goodshepherdwritingandpublishing.com

Posted by The Author at 3:04 PM No comments: